I was lucky enough to be one of millions around the world to march on Saturday, January 21st, 2017 during the Woman’s March. Although Rome was more of a rally, it was still amazing to be a part of something so much bigger than myself.  Participating in something that finally felt like a step to real change focused on the people and the equality we all deserve felt something out of a movie.

To be surrounded by woman, men, and children of all ages, backgrounds, sexualities and ethnicities was incredible. There were speeches given twice over–once in Italian and once in English. These words of hope were given by strong and independent individuals yearning for change. A choir sang songs like This Little Light of Mine and Amazing Grace. The faces that filled the crowd were lit up and full of hope. What struck me the most were the smiles across so many faces. Although we all gathered to bring voice the wronged, it was done in such a positive way.

We all stood in front of the Pantheon, which is usually the main focus of the Piazza della Rotonda, but that day, it was just a wonderful backdrop to an exquisite event. They passed a board around asking for names and where we were from. I looked down the list and couldn’t help but smile.  Boston, Milwaukee, New York, California, Florida, Virginia, Illinois (from yours truly), Italy, Germany, Spain and so many more scribbled down. This event brought so many people together. Although so many of us were far from home, we still were able to participate in a day to advocate for pride, love and acceptance. As I marched in Rome, my sister and cousin marched in Chicago, my aunt marched in Seattle, and my Instagram and Facebook newsfeed showed friends that marched all over the rest of the world. Incredible.

A few pictures I took at the event: 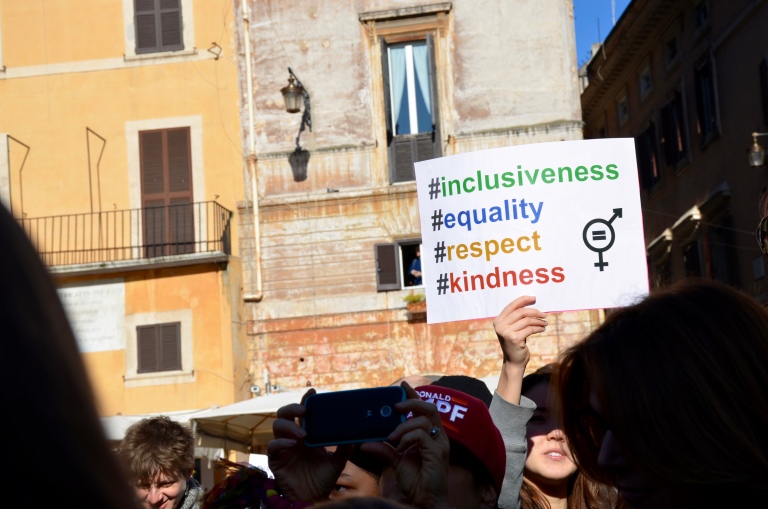 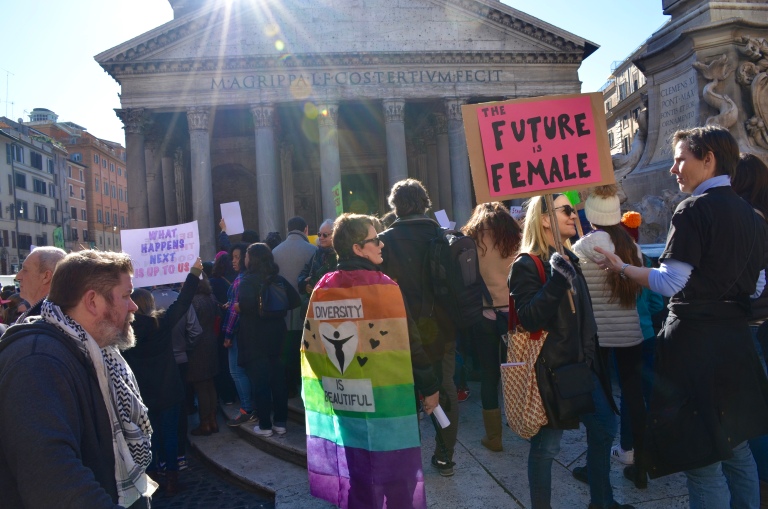 Being so many miles away from home, all I can do is read about what is happening. The laws being passed; the changes being made. I scroll through my CNN app and after two weeks of reading article after article of what has been signed, I couldn’t help but catch myself getting emotional today. I was told by friends and family that I should be lucky to be in Italy during this time of protest. But should I? For someone who feels so deeply for other people, not being able to stand with my fellow movers and shakers of the world is difficult. But I have complete trust and confidence in you all until I come home in May. And I swear that I’ll represent us well here in Europe.

All I know is that there used to be a love for people and a sense of compassion for others in a more effortless way than we see today. People in America and those who moved around the world were proud to be Americans. Today, there is still pride in the air but confusion of how to keep it from drifting away. It can still be salvaged. All I ask is to keep being peacemakers. Don’t stop marching, don’t stop trying to be heard. Because for once, I truly think that “We The People” might actually stand a chance at making change.

It was hard to pull myself away from the march at first. I wanted to stay but quickly realized that I only had a day in a half in Rome. I had to see as much as I could! I took my fair share of pictures at the march, talked with a few individuals and heard some beautiful speeches. Finally, we headed towards the Trevi Fountain. We drifted away from a day in history that we will be able to say that we were a part of.

*If you participated in the woman march, comment below! I’d love to hear about your experience and where in the world you were for it:)

When we turned the corner and the Trevi Fountain was revealed…wow. Like really guys, wow. I could have stayed there all day! To think that this fountain was constructed all those years ago was more than impressive. I looked at every detail in the marble, every aspect of this grand structure. The appreciation one can have for something of such magnitude and beauty can be pleasantly surprising. It definitely surprised me.

Before we left, we all took a coin to throw into the Trevi fountain. We became in touch with our inner Lizzie McGuire’s. Unfortunately, none of my friends opened their eyes to see their Paolos. Tragic. But alas, we have three months here. There’s still time for a boy on a vespa to drive up to them and whisk them away into a magical Italian Sunset. So once they came to terms with this, it was on to the next monument!

Walking throughout Rome is nothing like I imagined. The history that surrounds your every move is jaw dropping. We hadn’t realized what we were getting ourselves into until we made it over to the Trajan Forum ruins and on to the Colosseum. It was a beautiful blue skied day and the palm trees and warm sun that engulfed Rome made us feel like we were on a tropical vacation. Unfortunately, I had gotten sick so I had to skip out on the tour of the Colosseum. But fortunately, I’ll be back to Rome in May so I will definitely be seeing it then!

As we walked by…

When in Rome…we were a part of the Woman’s March, saw spectacular monuments, ate amazing ravioli, drank great wine, talked and laughed with great friends and were able to experience a historically famous city. And it was clear to see why. Until next time Rome.

I hope you float through the rest of your week nice and easy!

Check out more of Keara’s adventure on her personal travel blog at: catchingupwithkearablog.wordpress.com